The city of Tosashimizu spreads out on both sides of Cape Ashizuri in southern Kochi Prefecture. It occupies land formed by tectonic and magma-related activity millions of years ago, and has a mild climate thanks to the warm Kuroshio, also known as the Japan Current, which flows north from the East China Sea along Japan's Pacific coast. This combination of tectonic and oceanic forces gave birth to the seaside landscape and ecosystems that have provided a livelihood for the local people, who have practiced fishing and agriculture here for centuries. Tosashimizu works to conserve and highlight this unique natural environment and the seaside lifestyles it supports, and to pass the legacy on to future generations.

The Geological Origins of Tosashimizu

The land that is now occupied by Tosashimizu was formed when deep-sea sediment was pushed upward by the interplay of tectonic plates over tens of millions of years. In addition, the geological strata in the Tatsukushi and Ashizuri areas bear marks from 15 to 20 million years ago, when land at the edge of mainland Asia broke off into the ocean and formed the Japanese archipelago. The land that was fashioned in this great upheaval continues to be shaped by the movement of tectonic plates, as well as by weathering and erosion. 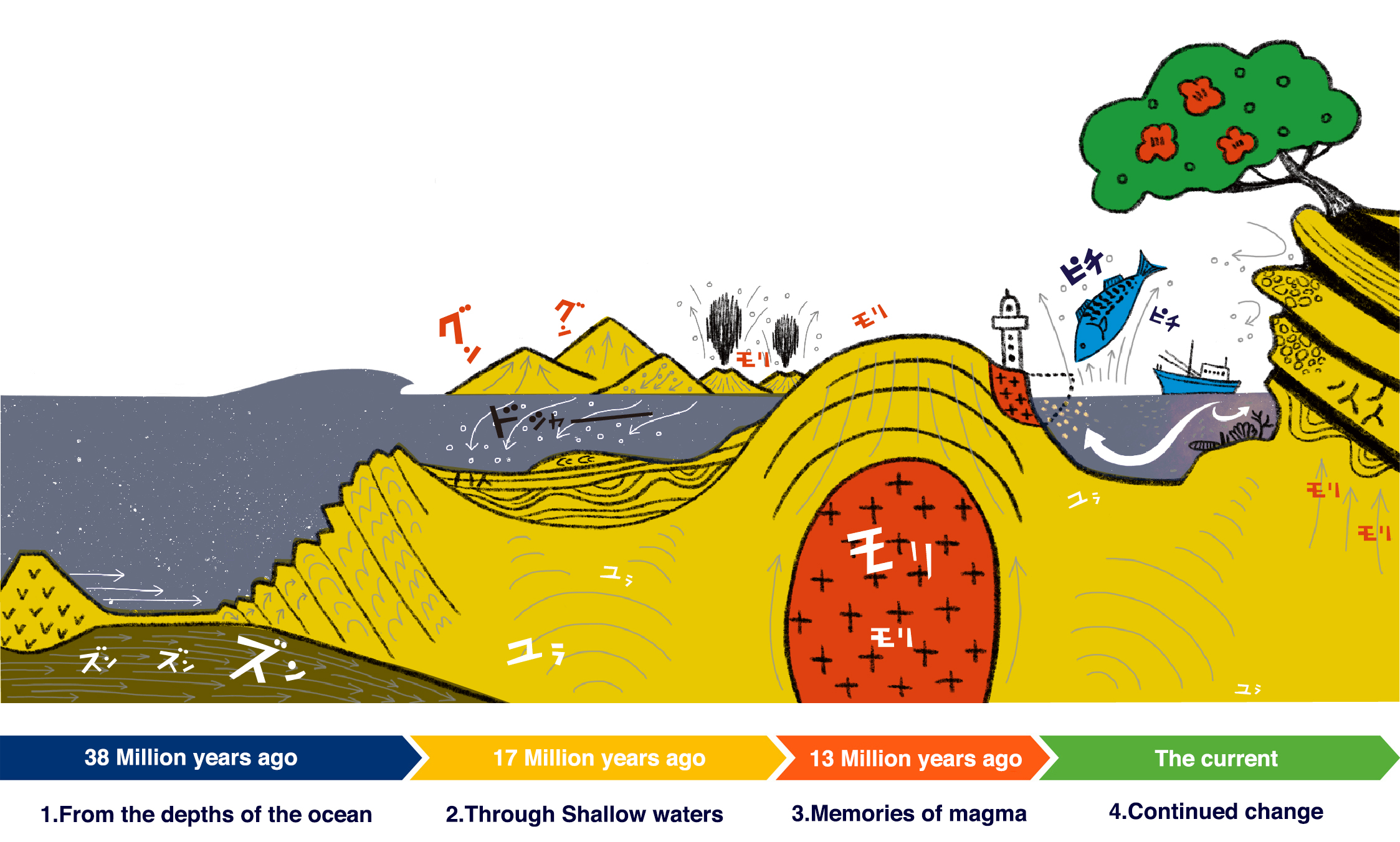 -Living with the Kuroshio-

the story of the land where fishermen are born

The Kuroshio and Local Culture

Life in Tosashimizu is inseparable from the sea. Historically a shipping hub, the city is now a major destination for marine tourism and remains one of the best places for fishing in all of Japan. All this is made possible by the warm Kuroshio (Japan Current), which flows north along the Pacific coast of Japan. Its presence has allowed the local people to develop not only a diverse food culture but also a lifestyle in which coexistence with and gratitude toward the sea play a central part. These principles have been passed down from generation to generation, and continue to influence daily life in the area. 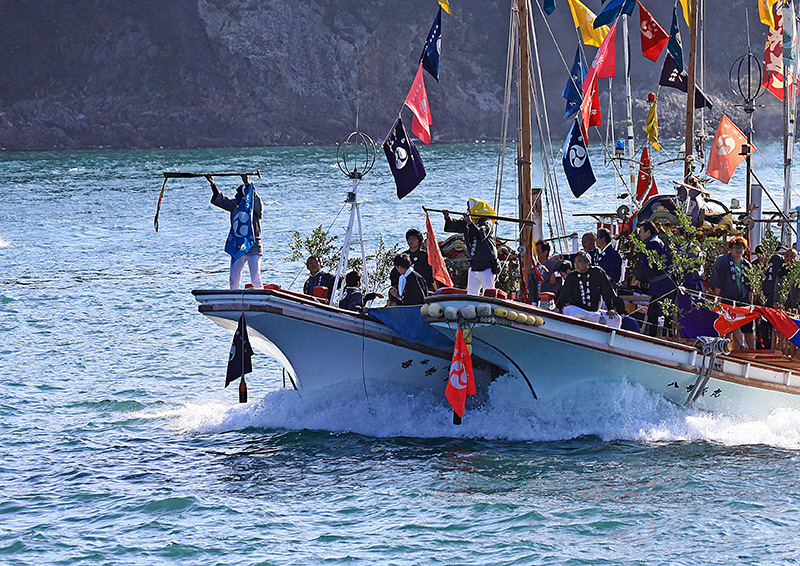 Blessings of the Kuroshio

Fishing in the Tosashimizu region benefits greatly from the Kuroshio. When the current collides with Cape Muroto and the Kii Peninsula further east, it forms so-called reverse currents. Combined with the distinctive underwater topography just off the coast, they create ideal conditions for a wide variety of fish species, including skipjack and bullet tuna traveling on the current. This abundance provides a livelihood for local fishermen and has made Tosashimizu famous for its fishing culture. 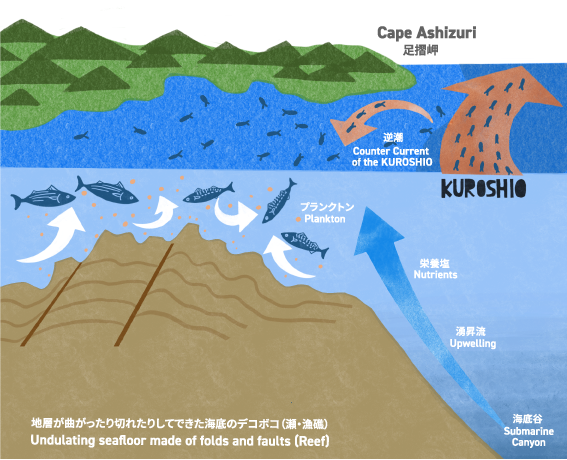 The Kuroshio and the Land

Both the natural environment of Tosashimizu and most of the lifestyles in this region have their origin in the interplay between the warm Kuroshio (Japan Current) and the local topography. The seafloor right outside Cape Ashizuri is uneven--a result of the diverse bedrock and marine erosion. When the Kuroshio collides with depressions in the ocean floor, accumulated nutrients swirl upward, attracting an abundance of fish.

Tatsukushi Bay, which is distinguished by its many asymmetrical inlets, was formed because the geological strata here are vulnerable to weathering and erosion. The diversity of corals and other marine life found in the bay is another result of the Kuroshio's ceaseless flow along the coast, where the landscape has been a source of wonder for visitors at least since the Edo period (1603-1868). 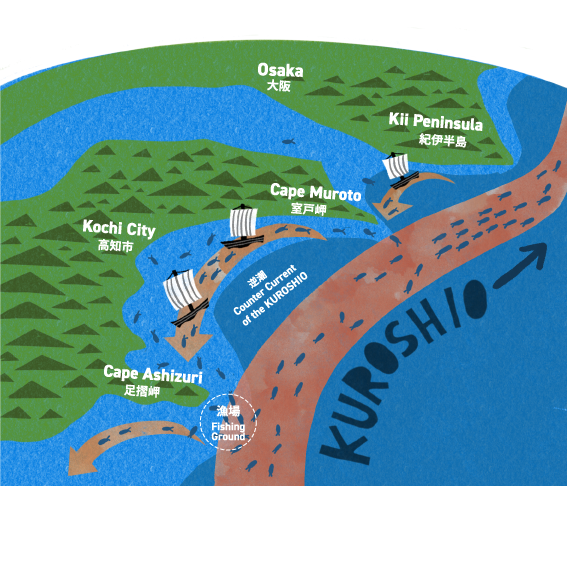 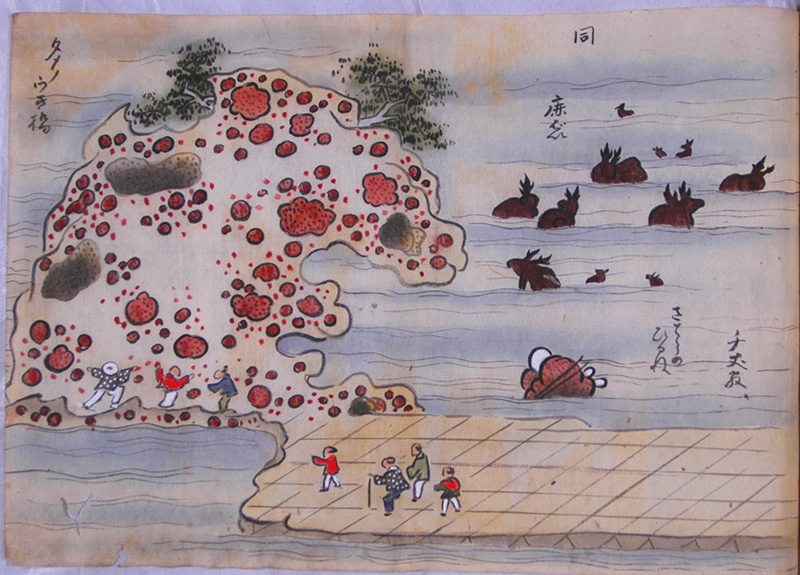 Edo period drawing of the Tatsukushi coast.
(From the Museum of Ehime History and Culture collection)